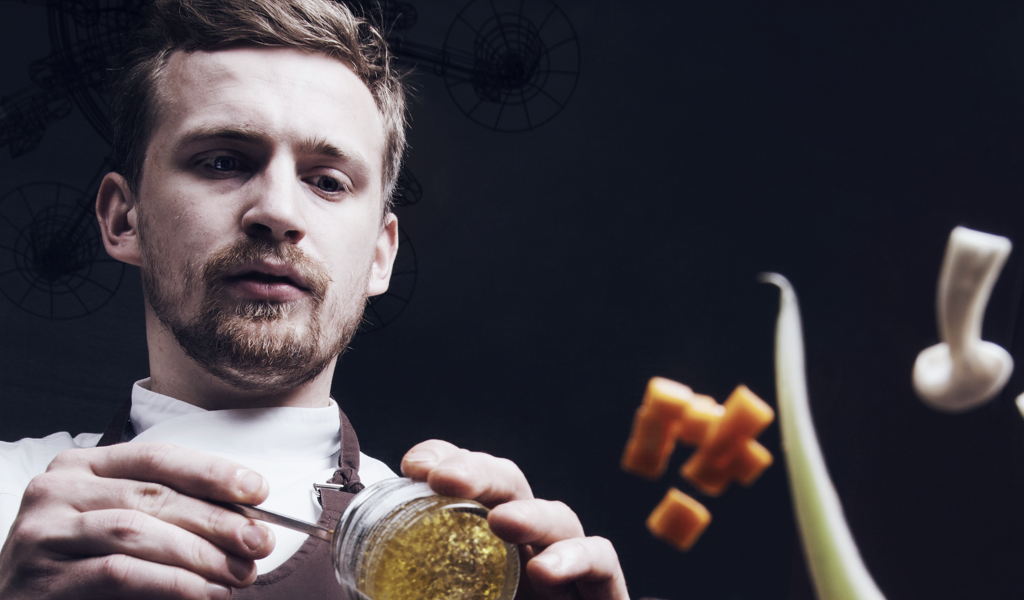 Located in the Quadrille Palace, the White Rabbit restaurant is an unusual place which widens the horizons of culinary experiences and at the same time, brings back the flavours from our childhood years. Here, traditional dishes are masterfully combined with modern trends. Together with unique interior designs of each of the three restaurant halls, it all creates a magical and unforgettable atmosphere.

Who is the author of the restaurant’s success? Who pulled the White Rabbit out of the hat? 😉

The Head Chef Marcin Popielarz did – a few words about him. He attended the Gastronomy and Hospitality School Complex in Gdańsk. He used to work, among others, in the Sheraton Sopot restaurant and also acquired experience in such restaurants as London Social Eating, Kolonihagen Frogner and Maaemo in Oslo. Since the beginning of the Quadrille’s operation, Marcin has been creating and developing the restaurant. His success in this undertaking can be measured by the great satisfaction of the restaurant’s Guests. Another notable indicator is the number of received professional distinctions, including the Gault & Millau Northern Europe Head Chef title and the winner of the international S.Pellegrino Young Chef competition semi-final for young talents of the culinary art.

It is a traditional Pomeranian cuisine served in a version worthy of the most prestigious restaurants in Europe. The Head Chef draws inspiration from the regional cuisine – Kashubian, Kociewie, Żuławy areas, and the Polish cuisine on a wider scale, and interprets them in his own way. Both Marcin’s mother and grandmother were keen on cooking and tried out new ideas by creating dishes from what was within their reach, often using just a few ingredients. This philosophy was adopted by the Head Chef, who selects a few products and uses them to create new flavours.

A regional product serves as a basis for Marcin’s vision of the dish. Accompanying ingredients also are of local origin. Fish comes from a local fish farm in Kleszczewo. Cheese comes from local producers, such as Osada Burego Misia and Kaszubska Koza, while mushrooms are collected in the Tuchola Forest. In summer, the Head Chef’s farm, located in his family village in the Stegna district, is the main support for the White Rabbit restaurant. From May 2017, an additional support comes from the crops grown in the garden created right next to the restaurant – herbs and vegetables come straight onto the Guests’ plates.

When asked about his most memorable flavour, Marcin claims that it is the pickled beetroot soup cooked by his Mom at Christmas. The Head Chef also emphasizes that nowadays the whole world is using pickling as a means of gastronomic expression, and Poland played a great role in this due to the Cook It Raw event organized in Poland in 2012 on the initiative of Wojciech Amaro.

The year 2018 will be a busy one for Marcin Popielarz. His plans include further development of the White Rabbit brand. Two flagship tasting menus – Żuławy & Vistula Spit and Kashubia & Kociewie – which refer to the Pomeranian regions, their culinary traditions and culture, have been recently introduced to the restaurant’s offer and are a guarantee of unforgettable culinary experiences. In May, the world grand finale of the San Pellegrino Young Chef competition will take place in Milan. Additionally, the Head Chef would like to start working on a book inspired by Żuławy and the White Rabbit restaurant.

The above plans match perfectly Marcin Popielarz’s motto – ‘Your last service shows who you are’ – which according to the Head Chef, is the biggest motivation to work harder.