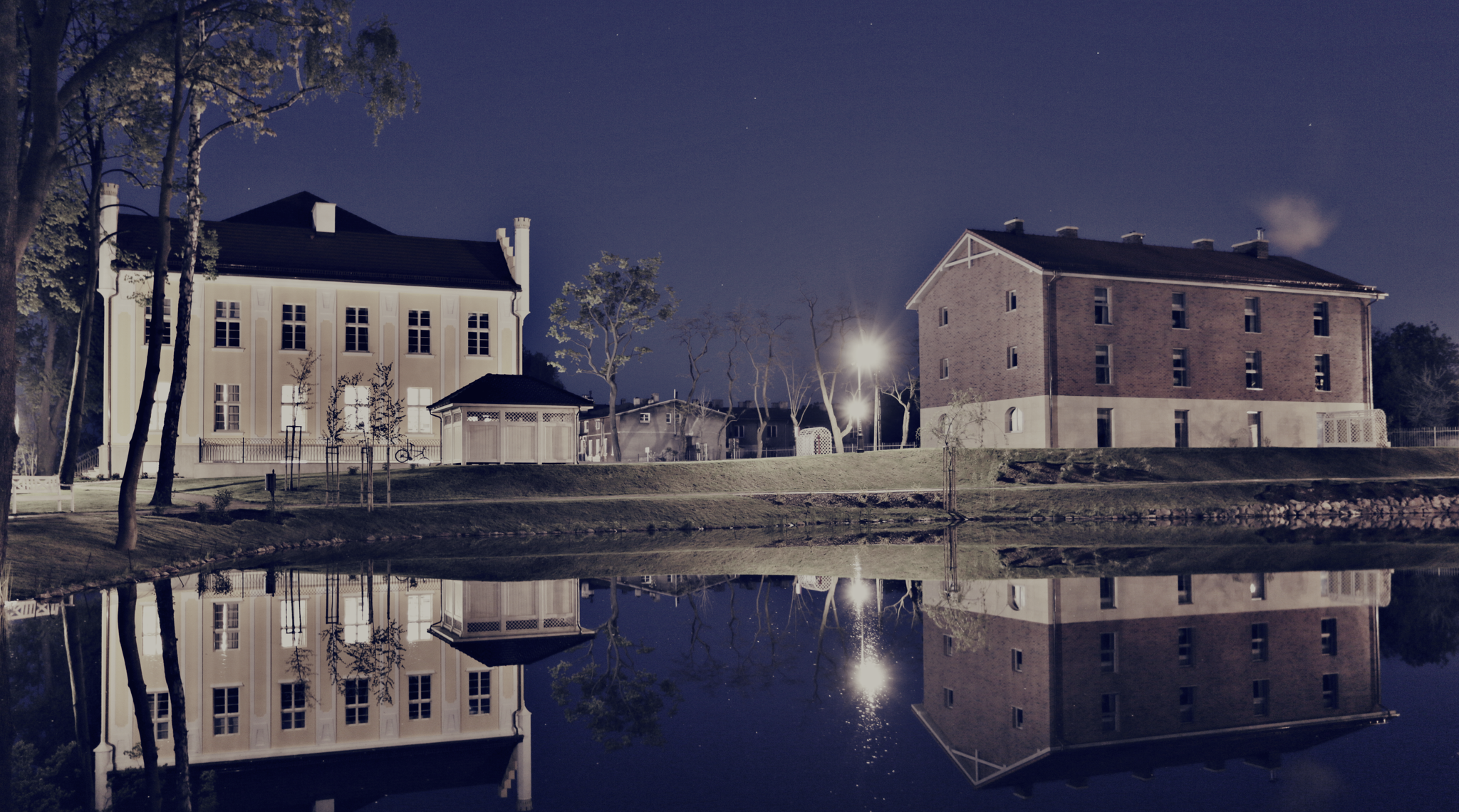 When you look at the beautiful Quadrille Palace, you may not be aware just how far its history reaches back into the past. There are a few things which we would like to tell you about.

It is not known when the first manor building was built, however it is certain that the current palace was constructed on the foundations of an older object, the history of which goes as far back as the Middle Ages. It is assumed that a gentry residence was already located here in the 14th century.

In the 18th century, the palace and its surrounding buildings were changing along with the development of the countryside. The most significant changes were introduced by the gentry family of von Krockow who owned the estate starting 1730. It was them who built the baroque and rococo residence with its front turned to the north-east and a vast park with a part of its vegetation comprised of the original plants and trees. A great number of broadleaf trees and yews were additionally planted and the nearby ponds of water were adapted for recreational purposes. At the end of the 18th century, an octagonal aviary building was built in the park. The palace remained in that form for over 100 years.

In 1847, the estate was purchased by baron Wilhelm von Brauchitsch – the Starost of the Gdańsk District, senior notary advisor and a secret advisor in Koszalin. Right after the purchase, a radical reconstruction of the object was started – its elevation acquired a very popular at that time English neo-Gothic design. The date 1859 placed on the main portal of the building commemorates the end of this reconstruction. The coat of arms of the von Brauchitsch family, representing a deer jumping, is still preserved above the park-side entrance. Moreover, the previously baroque park with decorative French beds, a garden showroom, a fountain and a hunting park was transformed into an English park where far-reaching view corridors constituted its characteristic components. A scenic meadow, free system of paths, two ponds and a water channel added romanticism to the landscape.

The estate was owned by the Brauchitsch family and their heirs until 1918. In the 1920s, the Polish government purchased the estate and resold it to Juliusz Jewelowski, the Senator of the Free City of Gdańsk, who decided to break up the estate a few years later and sell its greater part (400 ha) to be used as residential area. In the 1930s, a significantly smaller estate became the property of the Society of Secondary and Higher School Teachers in Warsaw and then was handed over to the Union of Polish Teachers, who were using the building until 1939.

During World War II, a Gestapo unit was stationed in the Palace. The object remained in a good shape through the war time activities and in 1946, was entered to the register of historic monuments. During the post-war period, High School No. 1 in Gdynia was seated here for nearly 60 years.

The 21st century has been the start of the most contemporary part of the Palace’s history – in November 2006, Przedsiębiorstwo Budowlane Górski [Górski Construction Company] took over the historic manor house and initially, sublet it to the Gdynia Film School which made its first steps here. The next stage included thorough renovation which turned it into a luxurious accommodation establishment combined with a conference and training centre. Additionally, a new building was built next to the Palace – the Outbuilding – with 21 business class rooms located on its over ground storeys, and a relaxation area with a swimming pool, massage salons, jacuzzi and saunas – in its underground part. Both buildings were connected by an underground corridor. The park with an area of 2 hectares was revitalized as a part of the project, which resulted in a new system of alleys, architectural features, climatic lighting and a stunning fountain. The pond, which is a characteristic element of this place, also went through a thorough metamorphosis.

Through many years of its existence, the Palace witnessed a number of owners, users, however the inscription “Semper Idem” (“Always the same”) placed over the main entrance still seems to remain up-to-date.